Kodu lets kids create games on Windows PCs via a simple visual programming language. We’ve compiled some key resources — including training videos, sample lessons, starter worlds, and connections to other Kodu educators, to make your on-ramp as smooth as possible. 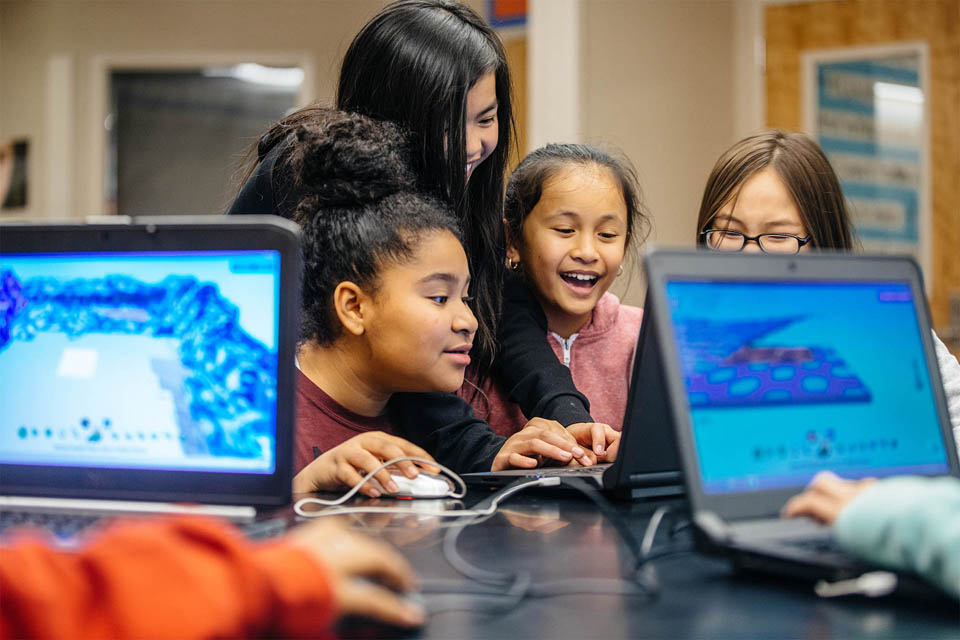 Explore mathematical problems and examine relationships among data. Create and interact with objects within a three-dimensional world to study algebraic and geometric concepts.

Lesson 1: Growing Squares
Learn to describe and analyze the pattern using math sentences and relationships when given incremental changes in the area of a square.

Lesson 2: Length, Width, Area, and Perimeter
Learn to create a three-dimensional object from two-dimensional representations when given the length, width, and height measurements for quadrilaterals.

Lesson 3: Area, Perimeter, and Volume
Learn to describe the property with the appropriate standard units when given a measure of length, width, height, surface area, perimeter, and volume.

Lesson 4: Surface Area and Volume
Learn to describe the change as a fraction of the original shape when given a change to a shape.

Lesson 5: Obstacle Course
Learn represent the situation, analyze the resulting data, and display the data in a table or graph when given a scenario.

Lesson 6: Placing and Programming Items
Learn to represent an object as a three-dimensional shape in a coordinate plane when given an object’s properties such as length, width, height, surface area, volume, and location.

Lesson 7: Timing and Winning
Learn to plot and model the shortest paths between the locations using a computer simulation when given multiple target locations and obstacles.

Lesson 8: Double the Items
Learn to design an investigation to determine the effect on the time it takes to complete the retrieval of the items when given an increase in target items.

Lesson 9: Data
Learn to sample a population to collect performance data on the task.

Lesson 10: Showcasing Creativity
Learn to collect data, analyze it, and report your findings.

Kodu programming tiles allow interaction with the micro:bit. The user can control character movement using the accelerometer, jump and shoot with a button press, display animations and scrolling text on the screen, and interface with other devices through the IO pin

Module 1: Kodu intro; Eating apples in the Kodu world
Learn to navigate through a world by learning programming tiles and the rule editor.

Module 2: Color Filters with Pursue and Consume
Learn programming tiles using the color filter “see” and “bumped” as well as “grab” actions to pick up an object.

Module 4: Rule Ordering and Default Value
Learn how rule order can be used to establish default values for an action.

Module 6: Basic paths; Follow the Yellow Brick Road idiom
Learn to create multiple paths as well as program characters with the “say” action and to follow a path.

Kodu Makerspace is a four-day camp of two hours per day. The camp series will explore the design process and cover skills needed to create worlds and games with Kodu Game Lab.

Session 1: Exploring Kodu Characters
This is a two-hour camp in which students will explore Kodu Game Lab by playing and then examining the character and action sequences of two games.

Session 2: Exploration and Modifying
This is a two-hour camp in which students will take their first steps in creating game action with When… Do… programming constructs in a tutorial to create a more complex game.

Session 3: Collaborative Game Development
This is a two-hour camp in which students will begin transforming their game plans into a working game using the techniques they learned in Sessions 1 and 2.

Session 4: Presentation of Game Development
This is a two-hour camp in which students will finalize their games by incorporating ideas from the feedback session and adding directions for the user.

Kodu Makerspace is a unit of eight, 50-minute lessons. The unit will explore the design process and computer science skills needed to create worlds and games.

Lesson 1: Managed Test Drive
Learn to load and play a Kodu game as well as navigate the menus associated with characters.

Lesson 3: Exploring Developer Experience, part 1
Learn to play a more complex game and follow along with a demonstration to modify the characters and the action.

Lesson 4: Exploring Developer Experience, part 2
Learn to develop a collaborative project to revise one of the Kodu games students have worked with during the past three lessons.

Lesson 5: Creative Collaboration
Learn to transform game plans into a working game using the techniques they learned in lessons 1 through 4.

Lesson 6: Open-ended Developer Experience, part 1
Learn to share the first draft of a game, gather feedback, and assess the feedback for consideration in the next draft of the game.

Lesson 7: Open-ended Developer Experience, part 2
Learn to finalize a game by incorporating ideas from the feedback session and adding directions for the user.

Lesson 8: Showcase Experience
Learn to a Gallery Walk for peers, teachers and other guests as well as reflect on the coding experience.

Week 1: Getting Started with Kodu
Learn about Game Making with Kodu Game Lab and the informal process of game design.

“Water All Around Us” provides lessons themed around water and designed explore the ways in which water connects humans, animals and weather within ecosystems.

Lesson 1: Play: Water all around us
Explore the important role that water plays in underwater animal ecosystems through the lens of the life of a cybersalmon (a Kodu style North American Sockeye Salmon)

Lesson 2: Remix: Water connects us all
Present a game world for players to observe as well as create their own salmon run game.

Kodu can be taught by any teacher without any previous coding experience. Outside resources provide training videos, lesson plans, and starter worlds for educators, administrators, and students.
External References Only

Lynda.com Kodu Curriculum Learn how to add objects and characters; introduce game logic with Kodu’s When/Do menus; and use properties like lighting, water, trees, and movable cameras. Lynn also covers advanced object-programming and property concepts, such as adding sounds, scoring, and titles to your game.

Kodu for Kids Kodu for Kids teaches you all you need to know to create great Kodu games that you can share with the world! Learn four start-to-finish example games for 1-Player Shooter; 2-Player Competition; Mission Quest; and Side-Scroller Experience.

Microsoft Educator Community Network with other Kodu Teachers. Learn about additional Kodu resources available written by the teacher, for the teacher.

The Kodu classroom kit is a set of lesson plans and activities for educators, after-school instructors, parents, peer mentors and administrators.

Module 1: Getting Started with Keyboard and Mouse
Learn to create a new world, terrain and characters.

Module 2: Getting Started with Xbox Controller
Learn to create a new world, terrain and characters

Kodu: Mars Edition shows what it is like to explore the surface of Mars, how to program an autonomous vehicle to scan and inspect unique features in the terrain, and allows students to recreate and simulate their experiences after researching a Mars landscape.

Lesson 1: Search and Explore Mars
Learn to determine the most effective set of commands to navigate a Rover across terrain to collect scientific data.

Lesson 2: Programming a Rover
Learn to determine the most effective set of commands to program a Rover to move autonomously across terrain to collect scientific data.

Kodu Touch Primer consisting of five, one hour experiences with Kodu Game Lab and targeted to those interested in learning about programing a Touch version of Kodu.

Lesson 1: Introduction to Touch Interface with Kodu Learn to navigate the Kodu world by using fingers to zoom in/out, orbit, drag, and pitch the camera.

Lesson 2: Placing and Customizing Objects Learn to choose the appropriate tool for a task by selecting to either paint terrain or place an object.

Lesson 3: Koding Kodu Learn to instruct an object to perform a task based on an event-driven paradigm by using a When…Do… statement.

Lesson 4: Kodu Konundrum Learn to add tiles to a When… section to differentiate behavior based on an object’s characteristics.

Use Kodu for the classroom. Browse through our featured Kodu video tutorials to make learning fun and easy.
External References Only

Research by a variety of faculty including David S. Touretzky of Carnegie Mellon University, Senior Lecturer in Game Design at the Waiariki Institute of Technology (Rotorua, New Zealand) and Allan Fowler.
External References Only